At first glance, supermarket queues and the cloud do not have much in common. In his presentation, André Bauer proved the opposite - and in just three minutes. Scientific facts and lots of entertainment value secured him first place at FameLab in Regensburg. 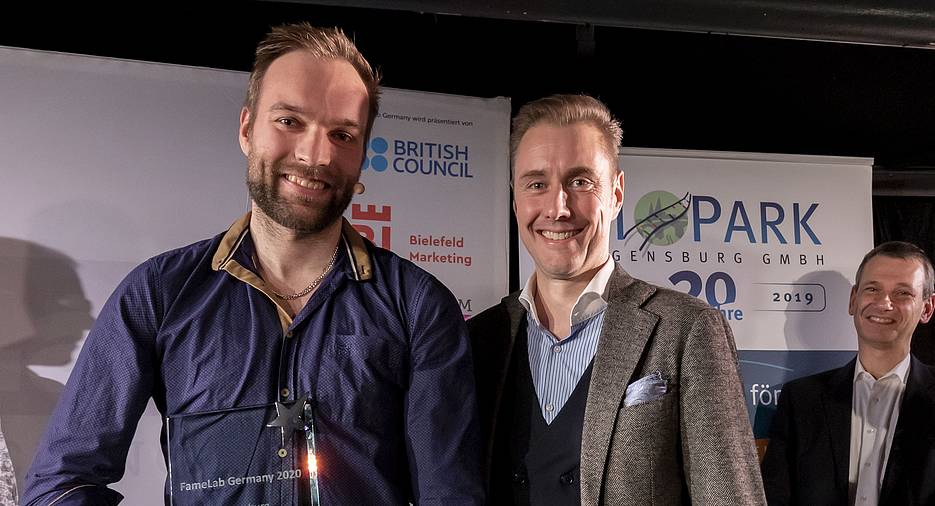 When videos and photos are edited or stored in the cloud, storage space, software and computing power are provided by data centers that consume a lot of energy. It's estimated that all of the world's data centres together produce the same amount of carbon dioxide emissions as global aviation.

This is the background to the work being carried out by doctoral student André Bauer at the Julius Maximilian University (JMU) in Würzburg. He conducts research at the Department of Computer Science II in Professor Samuel Kounev's team. In their research, forecasts are made to add or remove computing resources in the cloud in time to reduce power consumption and thus carbon dioxide emissions.

André Bauer won the FameLab regional decision on 11 March 2020 in Regensburg, organised by the local city marketing department. With the winning presentation "Teils Cloud, teils Green, mit Aussicht auf Höchstwerte von 8 bis 14 Servern", he was able to explain his research in three minutes in an understandable and humorous way. There were a total of five FameLab regional decisions in Germany. As the winner of Regensburg, André Bauer may now compete in the nationwide final in Bielefeld on April 23rd - provided that this major event is not postponed due to measures against the spread of the coronavirus.

FameLab is the world's largest competition for science communication, according to his own statement. The winners of the preliminary rounds in Germany will receive cash prizes and media training.